The Stars Align for Harmony

We’d like to introduce you to the stars of our upcoming production of Barry Manilow and Bruce Sussman’s Harmony: A New Musical – although Chip Zien and Sierra Boggess need no introduction. They have made their home onstage, originating roles that assured their place in theatre history long before their new roles at the National Yiddish Theatre Folksbiene. We feel so privileged to have them here with us as we start building our production, with performances starting March 23 and running through May 8, 2022.

If you were able to catch the recent critically-acclaimed Broadway production of Caroline, or Change, you saw the legendary Chip Zien playing the bombastic, Jewish patriarch Mr. Stopnick. And – if you’re like us, and you’ve listened to the original Broadway cast recording of Into The Woods one zillion times – you’ll recognize him as the man who originated the role of The Baker in the Sondheim/Lapine masterpiece. He also created the role of Mendel in William Finn’s highly-decorated Falsettos.

He was seen on Broadway in It Shoulda Been You, preceded by The Big Knife, The Roundabout’s The People in the Picture, The Country Girl directed by Mike Nichols and as Thenardier in the revival of Les Misérables. He appeared in Tommy Tune’s Grand Hotel playing Otto Kringelein, the memorable dancing bookkeeper. Other Broadway credits include The Boys From Syracuse, Chitty Chitty Bang Bang, All Over Town directed by Dustin Hoffman, The Suicide with Derek Jacobi.

On TV, Mr. Zien appeared on the final season of House of Cards. He received excellent notices for his recurring role on HBO’s The Night Of. He has been a series regular on The Caroline Rhea Show, Almost Perfect, Now And Again, Deadline, Shell Game, Love, Sidney, and Reggie. Through the years Mr. Zien guested on over 50 popular shows, as well as numerous pilots.

His film career has been varied.  His most recent featured role was in the just-completed Simchas and Sorrows.  He played the Chief Executive to the President of the United States in The Siege and was the voice of the infamous Howard the Duck.

Sierra Boggess is a real-life Disney princess with an impressive voice and a list of credits. She originated the role of Ariel in The Little Mermaid on Broadway, and, if you’ve ever seen the fantastic Phantom of the Opera 25th Anniversary Performance on Netflix, that was Boggess playing Christine.

Also on Broadway, Boggess starred in the Tony-nominated musical School Of Rock, It Shoulda Been You directed by David Hyde Pierce (alongside Chip Zien!), two separate engagements of The Phantom of the Opera, and the revival of Master Class (opposite Tyne Daly).

Other New York theater credits include the Manhattan Concert Productions’ The Secret Garden at Lincoln Center; the one-night-only concert of Guys & Dolls at Carnegie Hall opposite Nathan Lane, Patrick Wilson and Megan Mullally; the final Off-Broadway cast of Love, Loss, and What I Wore; and Music in the Air for City Center’s Encores! series. She also starred in the Las Vegas production of The Phantom of the Opera.

Regionally, she has been seen in Into The Woods (Hollywood Bowl), Ever After (Alliance Theatre), Age of Innocence (world premiere, Hartford Stage and McCarter Theatre), Princesses (world premiere, Goodspeed Opera House and Seattle’s 5th Avenue Theatre), and the national tour of Les Misérables. Film and Television credits include Vulture Club with Susan Sarandon and the web series What’s Your Emergency, directed by Michael Urie. Meet the Real-Life Figures Behind Harmony

An evening with Barry Manilow, Bruce Sussman, and HARMONY It wouldn’t be a Broadway musical without a love story. 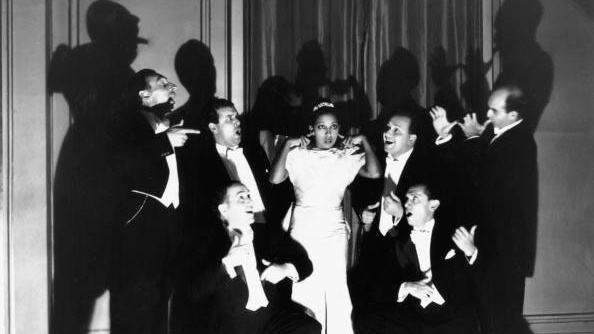 A Letter from Bruce Sussman and Barry Manilow The Secret to Bruce Sussman and Barry Manilow’s Longstanding Partnership

Bruce Sussman and Barry Manilow have been collaborating together for about 50 years. That’s a